Children and weight: Are current guidelines helpful? Do they do harm?

For a PDF of this issues of Family Meals Focus, click here.

Before we get started, know this: I have put the medical terms “obesity” and “overweight” in quotes to make clear that these are terms used by some others but not by me. Now to the issue at hand.

In spite of the fact that even intensive, long-term, multidisciplinary programs produce modest weight loss, the impetus to try to slim children down remains data-resistant and strong. A February 2022 Academy of Nutrition and Dietetics (Academy) position statement emphasized the role of RDNs in contributing nutrition and food access programming and intervention to multidisciplinary programming to prevent/treat child “overweight/obesity.”3 This includes screening for children whose BMI exceeds the 85th or 95th BMI percentile and weight reduction intervention: decreasing children’s dietary caloric density, limiting food portion sizes, teaching foods-to-eat and foods-to-avoid, and increasing physical activity. The Academy position is based on “better” results with RDN involvement in 3 systematic reviews, all of which showed tiny BMI z-score decreases: 0.07 to 0.13 (1 to 2 Kg).4-6

Labels and interventions do harm

The weight of relatively large children naturally adjusts downward starting at birth and continuing until they are 12 or more years old.

“Overweight/obesity” diagnosis and treatment, no matter the euphemisms with which they are clothed, disrupt feeding dynamics and undermine children’s homeostatic mechanisms. Despite recommending continued striving for weight loss3, 7 and warning RDNs who participate in weight reduction programming to prepare to treat eating disorders coming out of the programs,3 neither the Academy nor the Task Force3, 7 found evidence that current policy-driven interventions did harm. However, neither review addressed the behavioral and feeding dynamics research. Children who were labeled overweight, even if they were no heavier than their peers, felt flawed in every way–not smart, not physically capable, and not worthy.10 Nine-year-old girls classified as  overweight at age five years showed increased restraint, disinhibition, weight concern, increases in weight status, and body dissatisfaction.11 Preschool and school-age girls whose food was restricted at home were compared with unrestricted girls when all were given free access to “forbidden” food during a sham task in a research laboratory. The restricted girls ate more than unrestricted girls, felt bad about themselves for doing it, and weighed more.12 Teens who dieted using “healthy” means (exercised, ate more FV and fewer high fat foods and sweets) were just as heavy or heavier five years later than those who dieted using unhealthy means (skipping meals, fasting, vomiting, using diuretics and diet pills, smoking). All showed evidence of disordered eating.13 Mothers of children classified “overweight/obese” said they felt guilty, sad, and responsible for their child’s weight and that family members, children’s physicians, and others blamed them for letting their child get too heavy.14

Compared with children whose weight is perceived as “about right,” there is considerable evidence that accepting a child’s weight contributes to their consistent growth and even allows them to adjust to lower weight percentiles. Conversely, children who are perceived as “overweight/obese” gain weight faster than is natural for them. Independent of the children’s actual BMI, children of parents described by health professionals as “accurately perceiving” their child’s “overweight/obese” status were heavier over time than children of parents described as “failing to recognize” their child’s “overweight/obesity.”15 Being labeled “too fat” at age 10 years significantly predicted obesity at age 19 years, independent of actual BMI status and also controlling for household income, parental education, race, and age at menarche.16 Again, independent of the children’s actual BMI, over 3500 Australian children followed from 4 to 13 y/o had a greater increase in BMI z-score when their parents perceived them as being “overweight” than when parents saw them as being “about the right weight.”17

We have known for decades that the weight of relatively large children naturally adjusts downward starting at birth and continuing until they are 12 or more years old. Early intervention risks interfering with that natural adjustment. Sixty-four percent of infants with a WL z-score +1.0 to ≥+2.0 (85th to ≥95th percentile) had a BMI z-score of 0.0 (50th percentile) at 8 y/o.18 Rapid early weight gain was associated with greater height and lean body mass at 8 y/o, but not with greater fatness.19 Sixty percent of children who were classified as “obese” at 2 y/o had slimmed below that classification by age 8 years.20 At age 13 years, children whose W/H is ≥95th %tile have a >50% probability of having an adult BMI ≤30.21 The build (leanness and heaviness independent of fatness) tracked in nine y/o studied 50 years later but fatness did not. There was no excess adult health risk from childhood or teenage heavy build or relatively high body fat. On the other hand, the thinnest children who became obese as adults had the highest adult health risk.22 Most children slim down as they get older, and the numbers from disparate studies are impressively consistent. Seventy-five percent of infants and toddlers identified as obese/overweight (≥120% relative weight/height or skinfold ≥ 85th %tile) slimmed down as adults. Seventy-five percent of infants and toddlers whose relative weight/height ≥120% mean had BMI in the “normal” range as adults, as did 60 to 75% of preschoolers, and 40 to 60% of school-age children. The nine-year cohort of a sixteen-year longitudinal study found that weight gain in infancy was a poor predictor of 9-y/o obesity. Three of four infants classified as “obese” had slimmed into the “normal weight” category, and the fourth had slimmed to follow a consistent growth trajectory that was above the “normal weight” category.24 Similarly, in the sixteen-year cohort, “obese/overweight infants” showed no greater risk than thin ones of growing up fat.25

Children and weight: help without harming

Does this mean that we do nothing at all? Absolutely not! Instead, monitor children’s growth and support their consistent growth, including their natural growth adjustments, by teaching parents to follow the Satter Division of Responsibility in Feeding (sDOR) from birth.26 Flag the child’s medical record for periodic assessment of fdSatter/sDOR adherence and ongoing consistent growth. As outlined in a related issue of Family Meals Focus,27 detect early growth acceleration or faltering and intervene by identifying and correcting factors that disrupt feeding dynamics, the child’s energy balance, and the child’s growth trajectory. Avoid direct or indirect attempts to get the child to lose weight. Such attempts interfere with children’s natural slimming and with weight maintenance throughout life.

For more about providing, not depriving and assessing children’s growth, see Ellyn Satter’s Your Child’s Weight: Helping Without Harming.

For more about following the Satter Division of Responsibility in Feeding and letting children grow up to get bodies that are right for them, see Ellyn Satter’s Your Child’s Weight: Helping Without Harming. 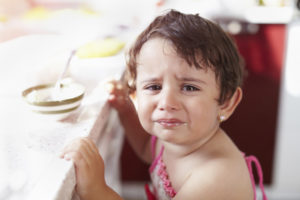 This intervention-based, intensive workshop shows professionals how to do Satter-based secondary intervention: To accurately apply the feeding dynamics model and sDOR approach in doing assessment and treatment with established feeding problems.