Home » How to feed » Child feeding ages and stages 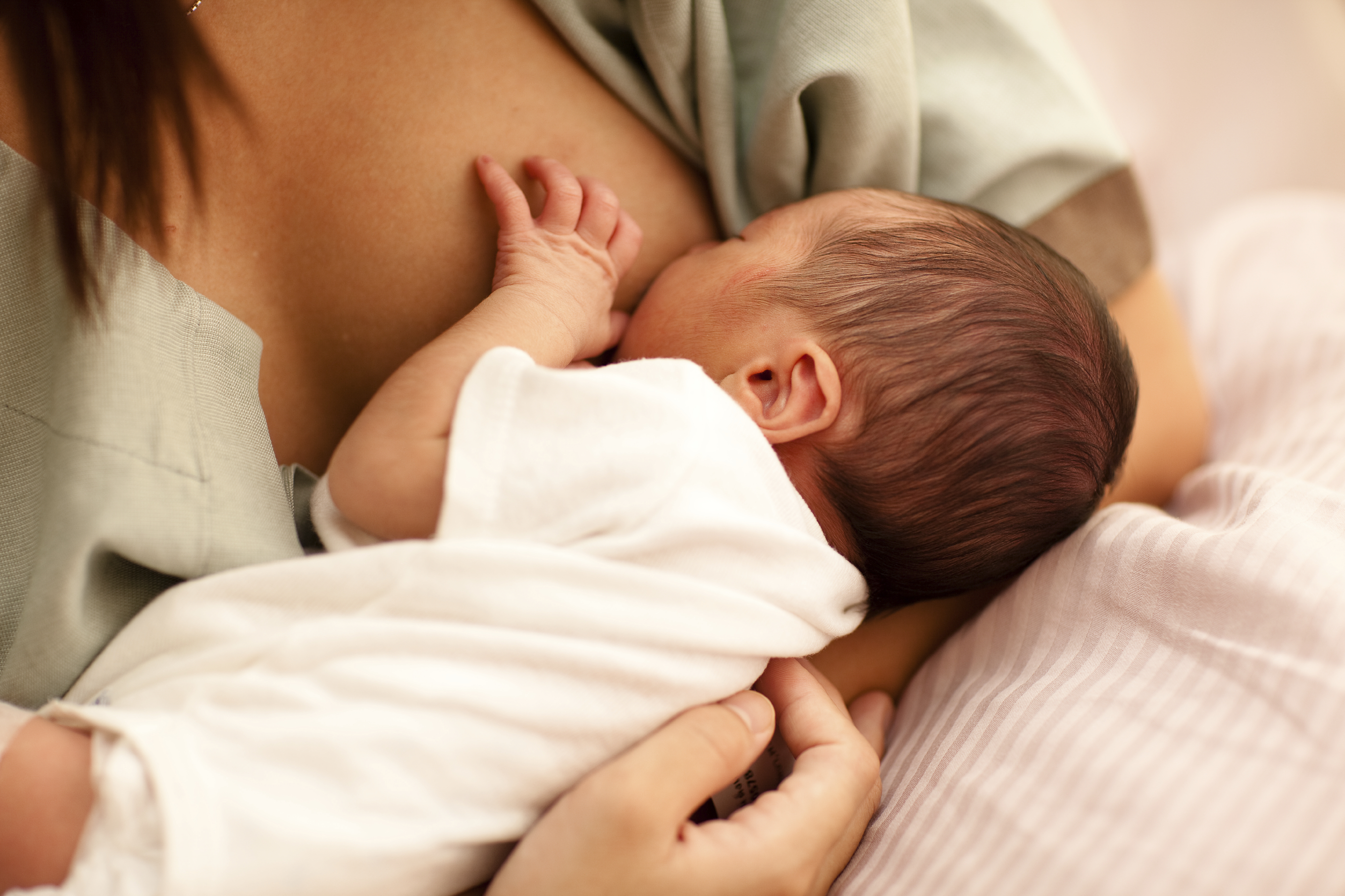 Child of Mine’s superb chapters on breast- and formula feeding help from day one!

Video shows you what to do and not do with feeding.

See what to do and not do with feeding.

Help your newborn be calm and stay awake

Your newborn comes out of a quiet, dark place into a world full of sights, sounds and commotion. To do well with eating, she needs help being calm and staying awake. To help her, feed her the way she wants you to.

Do what your baby wants with feeding

Don’t worry about spoiling her. You can’t spoil a tiny baby.

Your baby knows how much to eat

Your baby will eat as much as she needs and grow in the way that is right for her if you maintain a division of responsibility in feeding.You are responsible for the what of feeding – breastmilk or formula. Your baby is responsible for everything else – when, where, how much, how fast.

Child of Mine’s excellent chapters on breast- and formula feeding help from day one!

Videos show you what to do and not do with feeding.

When your baby is 2 or 3 months old, he begins to learn about love. He watches, smiles, jabbers, and reaches out to get your attention and to keep you close. Your paying attention to him and doing what he wants shows him you love him and teaches him to love you back. Don’t worry about spoiling him. You can’t spoil a tiny baby.

Guide feeding based on your baby’s cues

Feed on demand: Go by information coming from your baby to guide feeding

Start solids based on what your baby can do, not on how old he is: when he can sit up, see food coming, and open up for it. That is around six months for most babies. 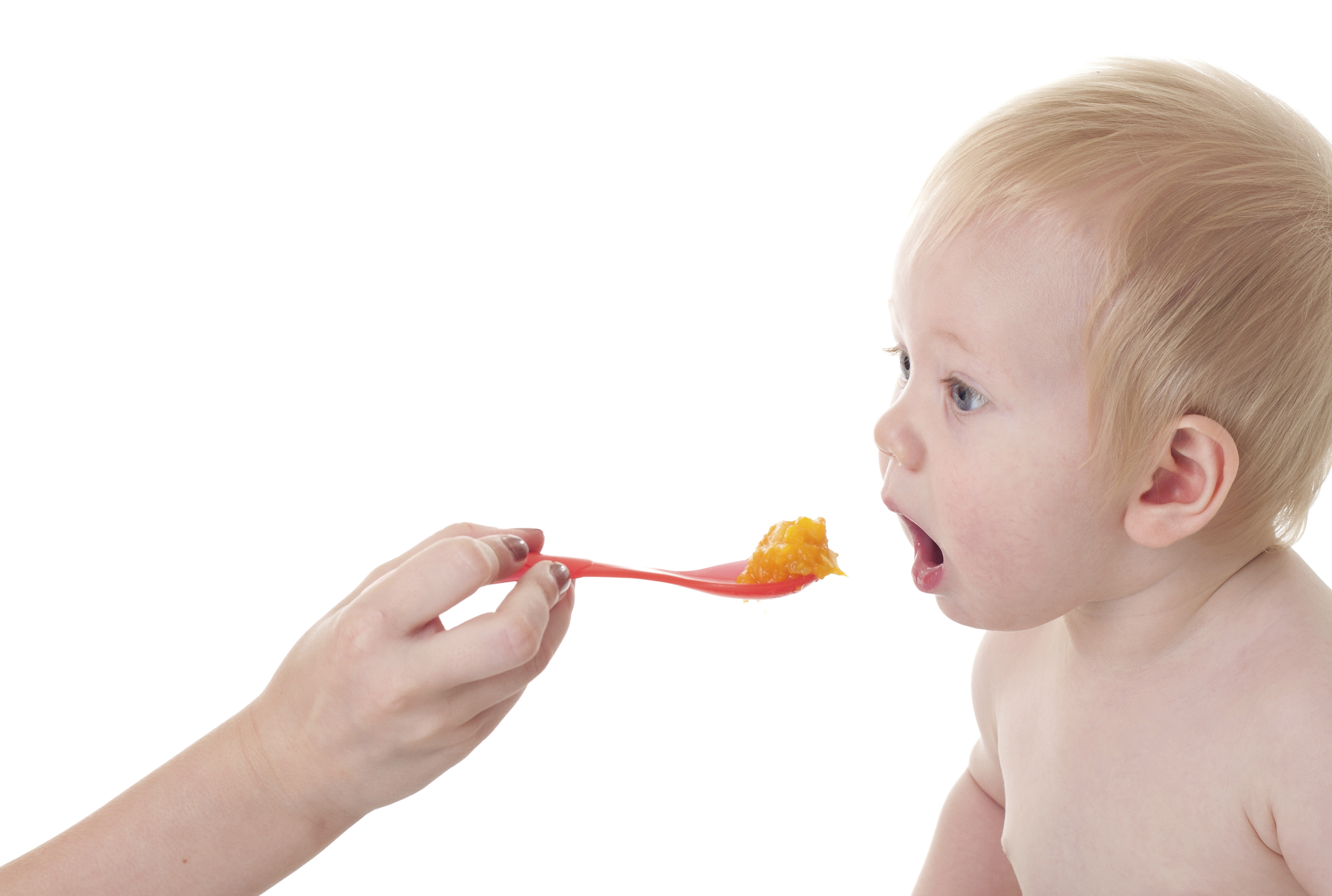 Feeding booklet offers you a quick and easy way to do well with solid foods.

Feeding video shows you how to feed solid foods and that each child is different.

Your older baby’s learning to eat solid foods goes along with her interest in the world. She watches you eat, and she wants to eat, too. Go by what your baby can do, not by how old she is to guide starting and progressing solid foods.  Then let her do it her way. One baby will accept solid foods from the start, quickly learn to close her lips over the spoon and swallow, accept thicker, lumpier food, and be ready by 7 to 10 months to finger-feed herself modified family food at family meals. Another cautiously accepts solids but needs to be introduced gradually to a variety of tastes and textures and get to family meals when she is in her second or even third year. Another takes to the spoon readily and demands to feed herself—even  though she can’t! Still another isn’t at all interested in the spoon, and waits to eat solid foods until she can finger-feed herself family food.

Start solids based on what your baby can do

This point is NOT to get food into your baby. She is getting plenty of nourishment from her breastmilk or formula. It is to introduce her to the notion of eating different food, in a different way. Stow your agenda, and don’t get pushy or you will spoil the fun for both of you! Your baby is ready to be introduced to solid foods when she can:

How to introduce solid foods (provided your child is willing):

Move on to thicker and lumpier foods

You will help your baby to develop her mouth skills by offering her thicker and lumpier food and then pieces of soft family food at family meals. She will eat more regularly and at longer intervals, so feeding times are partly on demand and partly on a schedule that you determine. Feeding her will go best if you get started now with family meals. 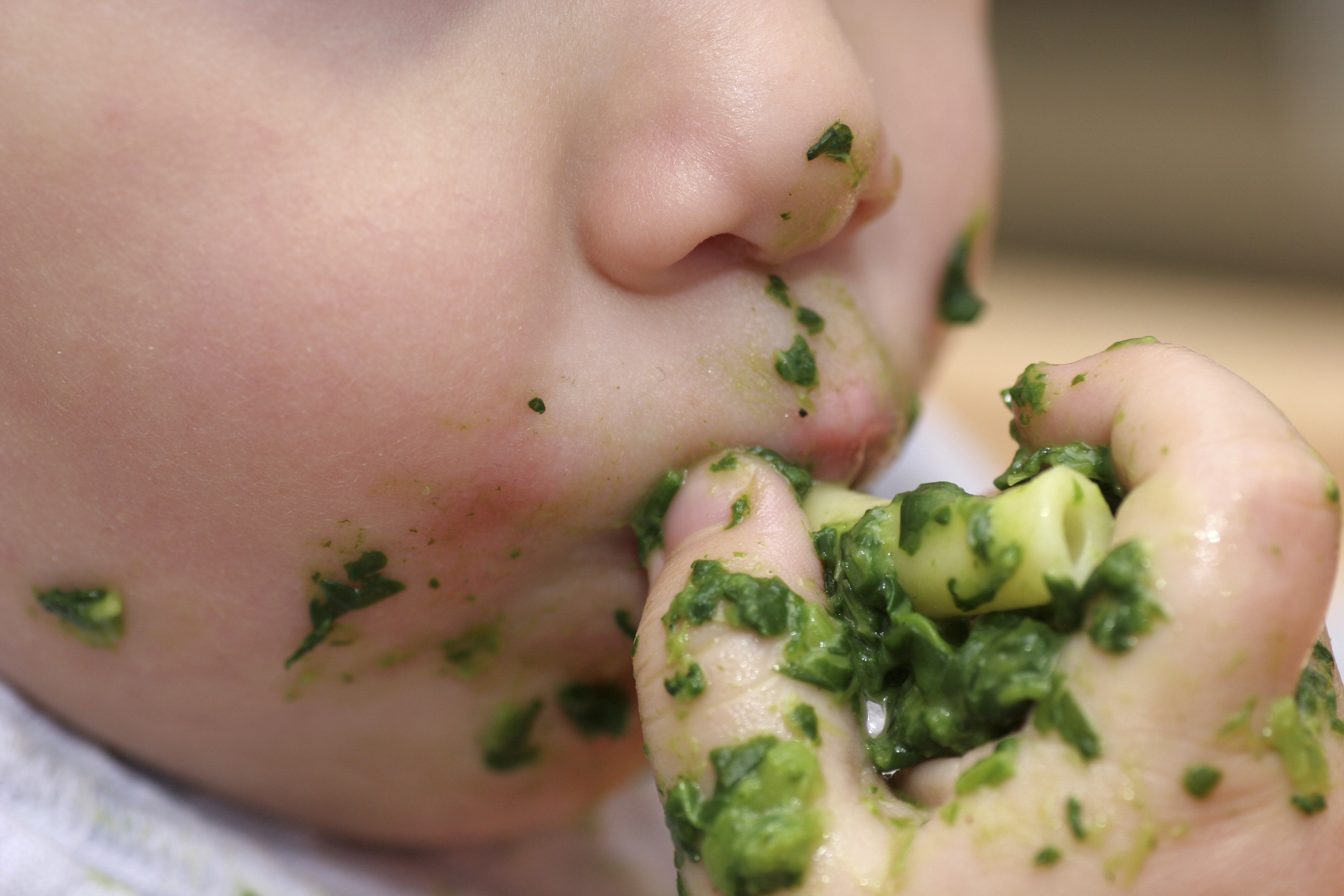 The almost-toddler – the child just getting started with finger-feeding – cares deeply about feeding himself and is enthusiastic about eating almost everything you put before him. The problem is that it happens so fast. One day he happily lets you feed him. The very next day – or the very next meal – he refuses the spoon, grabs at it, and puts up a fuss when you try to feed him. Many parents become alarmed and force or play games to get their child to eat. Don’t. His eating will be worse, not better, and you will introduce feeding struggles that can go on for years. Instead, let him feed himself. Get started with family meals, if you aren’t having them already, and eat with him, don’t just feed him.

Include your child in family meals

Get started with sit-down snacks

During the older baby stage, in response to your child’s increased regularity with feeding, you offered snacks partly on demand and partly on a schedule that you determined. At the almost-toddler stage, you continue to support his transition from demand feeding to structure by offering your child sit-down snacks roughly every two or three hours between meals. That lets him arrive at mealtime hungry (but not starved) and therefore able to behave nicely: He is interested in eating the food there. While he is likely to love drinking and eating on the go, he won’t learn to eat the food you eat because his special food, delivered in his special way, is more to his liking. Offer any nipple-feedings (breastmilk or formula) as a structured, sit-down snack. Don’t offer anything else between times except water. You are establishing the meals-plus-snacks routine of the division of responsibility for older children: Parents do the what, when and where of feeding, children do the how much and whether of eating. 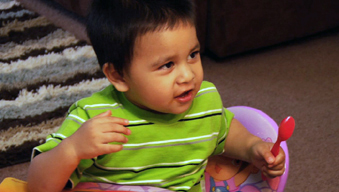 Watching the toddlers on this video shows that your toddler’s picky eating is normal.

After eating enthusiastically as an almost-toddler, your toddler’s eating will suddenly become cautious, erratic, picky, and fickle. Many times, she will only eat a few tastes, swallows, finger-fulls, or bites. Other times, she will eat more than you can imagine.  Do not try in any way to get her to eat. Instead, give her both clear leadership and a sense of control.

Your toddler is at high risk for learning to use food for emotional reasons. Toddlers are active, unceasing in their demands and prone to get upset. It is tempting to give food to quell the riot. Don’t. Instead, stick to scheduled feedings and sort out whether your child is hungry or sad, full or tired. Give attention, discipline, hugs or naps.

Maintain the quality of your feeding relationship 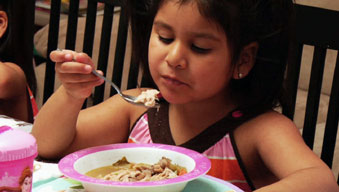 Your Child’s Weight reassures you that children come in all sizes.

Compared with feeding the toddler, feeding the preschooler is easy. Your preschooler is playful and quirky and wants to please you in all ways – including eating. But in some ways, that makes feeding harder. You can get your preschooler to eat more, less, or different foods than he wants. You can keep after him about table manners, even though it is still natural for him to use his fingers along with his silverware. But if you do, it will make him feel bad about eating. He won’t enjoy learning to eat the foods you eat. He will stop being able  to eat as much as he is hungry forl. He will, that is, provided he is a compliant child. If he is not so compliant, he will fight back and feeding will become a battle ground. Stow your agendas, make meals with food you enjoy, eat with him, and follow the division of responsibility in feeding. Then trust your preschooler manage his own eating. 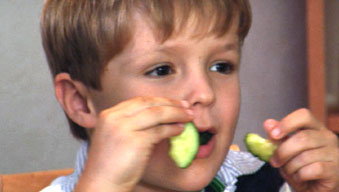 Your Child’s Weight helps with feeding your school-age child.

Your school-age child is full of contradictions. She wants to master all things – including eating, but she is still a child, and is entitled to be free from worry about eating, moving, and weight. She seems independent, but she depends on you to keep control of the family menu and continues to need the structure and support of regular family meals and structured snacks.

Continue to follow the division of responsibility in feeding

Exert your authority on after-school snacking 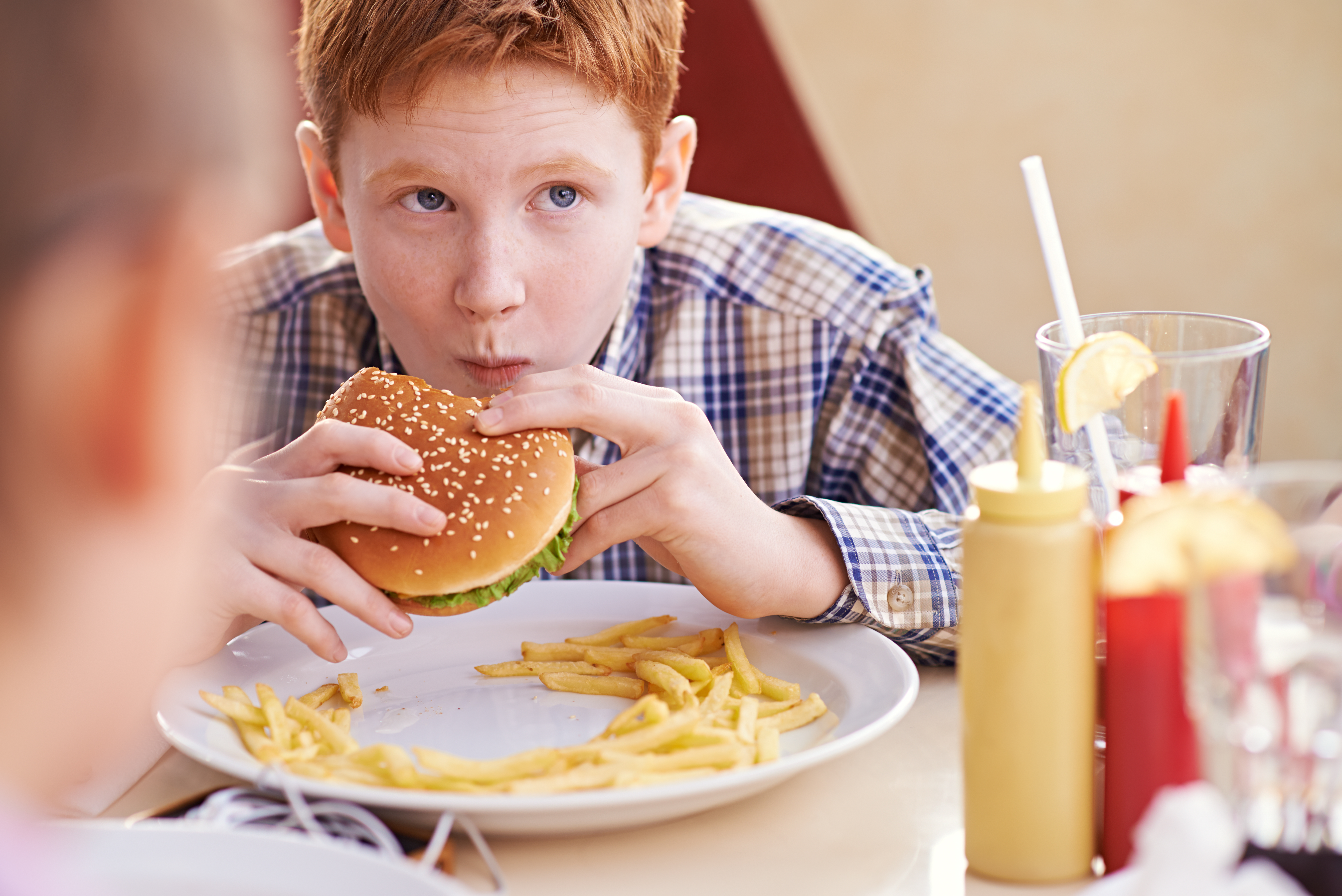 Your Child’s Weight has a great chapter on understanding – and feeding – your adolescent!

Use Secrets to teach your child to cook!

Despite his acting like it doesn’t matter, your adolescent continues to depend on you to maintain the structure of family meals. He will participate in family meals when you make meals a priority, keep mealtimes pleasant and use mealtimes for connecting. Adolescents who have family meals do better in all ways, and they do better nutritionally after they leave home. With feeding as with all other things, your task is to find the middle ground between being controlling on the one hand and throwing away all controls on the other.

Continue to follow the division of responsibility in feeding