The Satter Division of Responsibility in Feeding works for special needs

Follow the Satter Division of Responsibility in Feeding with your child with special needs, even if he is said to have sensory processing disorder. Think of him as a normal, extremely picky child – which he is. Give him many unpressured chances to learn to eat, be patient, and prepare to be surprised and impressed with how he brings himself along with eating. He will not do, not do, not do, and then he will do!

A premature child who has been tube fed

A mother writes that her son has been diagnosed with sensory processing disorder (SPD). “Carl was born prematurely and was in the hospital for three months. After he came home, it was one health procedure after another, and in the process he hasn’t learned to eat. Instead, he has been fed through a gastrostomy tube. Now he is two years old, he is well, and we are trying to teach him to eat. Our occupational therapist jollies Carl along and plays games until he opens his mouth, then she slips in a little brush and rubs it around. She calls that oral desensitization. Or she slips in food. Then she ‘rewards’ Carl for ‘eating’ by letting him play with a toy. Carl doesn’t like it – he starts crying when we get near the feeding clinic. At home, we are to hold the food closely in front of his mouth until he gives in and eats a bite, then reward him. We are to put on a ‘happy face’ and give him lots of praise when he eats, and not look at or talk to him when he doesn’t. We are to rave about the food, remind him that big boys eat, and play games with the food: ‘see this little [broccoli] tree, wouldn’t it be fun to eat it?’ It takes hours, we are all miserable, and his eating is getting worse, not better.”

Carl can be trusted to get himself to eat

From the perspective of the Satter Feeding Dynamics Model (fdSatter), you don’t have to get Carl to eat. Carl will get himself to eat. Carl is naturally cautious about eating – he missed out on two years’ eating experience, and it is all new to him. Not only that, but much of what happened to his mouth early on was painful. But he wants to grow up – with eating as in all ways. Even the sickest child retains that drive, and, because of it, you can trust him to manage his own anxiety about eating and push himself along. You can trust him, that is, provided you give him plenty of time, developmentally appropriate opportunities to learn, and do not pressure him in any way to eat.

The control approach applies outside pressure to get children to eat

In contrast to fdSatter, your OT believes that children with SPD or other sensory issues need pushing from the outside in order to get past their anxiety and learn to eat. She uses various forms of pressure, such as enticement, distraction, approval, reward, and punishment. Children can see through even cheerful, enthusiastic pressure and react to it by resisting, rather than mastering eating. Little wonder that pressure-based clinicians assert that “a child with a feeding problem would starve to death rather than eat foods beyond their comfort level.” Sensory issues do not make children behave in such an abnormal fashion relative to eating; pressure with feeding does.

Children with sensory issues push themselves along to learn to eat

Many children have sensory issues with feeding, but with plenty of time and no pressure, they manage their own anxiety and push themselves along to learn to eat.

Don’t let your hands be tied by an SPD diagnosis. Children with sensory issues are slow to learn, but they do learn. Keep in mind that everybody’s got something about themselves that they have to learn to manage. Many children have sensory issues – they are temperamentally negative, shy, or slow-to-warm up, are so sensitive to tastes, textures, and even smells that they gag or throw up, and are reluctant to touch certain textures or wear certain clothing. But with plenty of time and no pressure, they manage their own anxiety and push themselves along to learn.

Think of Carl as a regular child

Feed Carl like he is a normal, extremely picky child – which he is. Give him many unpressured chances to learn to eat, be patient, and prepare to be surprised and impressed.

Be very careful to follow the division of responsibility

Expect progress to be uneven

Then go off by yourself, shed a tear or two, and celebrate. But don’t let Carl catch you at it. As far as he is concerned, his learning and growing is all in a day’s work.

For help feeding your special needs child like a regular kid, read Ellyn Satter’s Child of Mine: Feeding with Love and Good Sense.

To see what feeding looks like with “regular” children, see Ellyn Satter’s Feeding with Love and Good Sense DVD II. For home use version, click here. 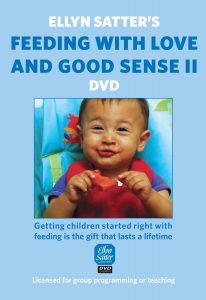 More about how to feed