Do children lose the ability to self-regulate?

Seven-year-old Liam’s parents say he is always hungry, and they are looking for ways to get him to eat less. They have heard that some kids Liam’s age lose the ability to feel fullness. They complain Liam eats ate way more than other children, who seem to get by on more “reasonable” amounts. Liam always wants more at mealtimes, and parents allow seconds but by the third plate or so they start to dodge and say things like why don’t you take a drink or a break and see if you are still hungry. Liam begs for food between meals and the parents try not to give it to him, but eventually he wears them down and they let him eat. If there are sweets around, Liam almost literally falls on them, eating until his parents make him stop.

Come to think about it, Liam’s parents say, he has never really regulated. His eating “too much” started when he was weaned to the bottle from breastfeeding at age four months and that’s when his parents started putting the brakes on his eating. Liam took way more formula than the pediatrician said he should and ate jar after jar of baby food.

The the only way you can tell everyone is getting enough to eat is if there is food left over.

Is Liam offered enough to eat?

Clues that Liam isn’t being offered enough to eat are 1) No leftovers, and 2) No planned snacks. Liam’s parents are doing well with having family meals and they say they make lots of food, but Liam cleans it all up. There should be food left over—of the popular food, not just the salads and pickles. That is the only way you can tell everyone is getting enough to eat. Relative to snacks, rather than making Liam beg for snacks, his parents need to offer him snacks between times—made up or two or three foods, letting him eat as much as he wants.

Was Liam being offered enough fat? Consider a vegetarian mother who wrote that she had the same issue with her two boys. They ate huge amounts, there were even leftovers, and she gave them snacks. But they could only go an hour or so and then they were starving. What about fat, I wondered. Vegetarian food is generally low or even devoid of fat. Use whole milk. Use fat in cooking: about 3 tablespoons fat per quart of finished food. Put butter (or margarine), regular salad dressing, gravy, white sauce, etc on the table and let the boys eat as much or as little as they want. She did and the boys’ eating settled down. They could comfortably last 2 or 3 hours until it was time for another meal or snack, and then they were hungry, not famished.

What about medical issues?

A health professional who accepts the parents’ complaint at face value will look for medical or even emotional issues. Diabetes or a thyroid condition could increase a child’s energy needs, but such problems show up on routine medical exams. Being chronically hungry and afraid of having to go without food is likely to make Liam anxious and even depressed. A more intensive medical workup could identify issues, but first things first: Check out Liam’s long-term growth. Growth says a great deal about a child’s overall well-being.

What about Liam’s growth?

Parents most often get into this eating-too-much worry and food-restriction pattern with children they consider to be too fat. But Liam is slender, and he has always grown right along the 60th percentile for height and 40th percentile for weight. Sure, he is active, but not unusually so. He certainly isn’t as active as his friend Benjamin, who plots around the 75th percentile and eats about half as much. Rather than doing poorly with food regulation, Liam is regulating remarkably well. In spite of all the interference from his parents and health workers, he is growing consistently. Some restricted children fall off the growth curve. Others become food-preoccupied and gain weight too fast. But not Liam. Somehow, with all his pestering, he was managing to get as much as he needed to eat to grow consistently.

What about how much Liam eats?

Some children just eat a lot. Boys ages 6 to 8 years’ average food intake is around 2000 calories a day—about the same as their mothers’ calorie intake. But boys that age can eat as much as 4500 calories a day—way more than their fathers eat. And that is a lot of groceries! As Liam gets older, his calorie needs will increase until at age 15-17 years old he could eat almost 10,000 calories a day!1

The problem was feeding

The problem wasn’t that Liam ate too much. It was that his parents were making him go hungry. Children know how much they need to eat and that doesn’t go away. Or, in Liam’s case, it seemed to go away because his parents were making errors in feeding. Liam’s parents needed to feed based on the Satter Division of Responsibility in Feeding: They needed to do the what, when, and where of feeding and let Liam do the how much and whether of eating. They needed to provide adequate, appealing, and filling food at regular meals and snacks, and to correct their errors in feeding: Not having snacks, not having leftovers, and using too little fat.

It’s about responsibility, not blame

Liam’s parents took responsibility for their contribution to the problem, which allowed Liam to take responsibility for his contribution. Liam’s parents stopped restricting and reassured Liam, in word and deed, that he would get enough to eat. They had to dismantle all the ways they had put the brakes on Liam’s eating: Not making enough food, not providing snacks, restricting fat, avoiding sugary food, promoting low-calorie food, controlling portion sizes, outright restriction, distracting him from eating, the look. Liam’s parents didn’t say so, but if they were having nutritionally virtuous meals, they had to stop that. If they were short-order cooking, they needed to stop that as well. Making special food seems contradictory with getting to Liam to eat less, but parents resort to all sorts of tactics to try to control their child’s eating. Parents’ getting sDOR in place takes time, and so does Liam’s getting to the point where he trusts his parents to give him enough to eat. Liam’s responsibility is to eat as much as he wants at meal- and snack-time and not pester for food between times. At first, he will eat even more and keep pestering. If Liam’s parents hold firm with structure and reassuring him he will get enough to eat, he will come to trust his parents to feed him, and his eating and food-begging will settle down.

Parents need three months or so for new habits to feel right, and that’s about the right amount of time for children to get in their new groove. But positive change doesn’t take that long. Liam’s parents said that within a week their struggles around feeding settled down. Meals became more rewarding for them all. And it only got better. As time went on, they noticed that both they and Liam felt better, not only at mealtime, but all day long. 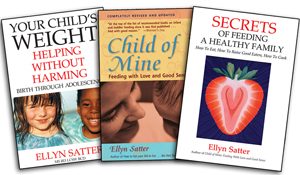