Breastfeeding in the second year and beyond

A dietitian writes: I am helping a mom address extended breastfeeding in the context of the division of responsibility in feeding (sDOR) for a toddler who is a picky eater. He fills up on breastmilk and then is not interested in family meals. I am not comfortable asking the parent to wean the child.

Satter writes: It isn’t necessary to wean the child to address this issue. Instead, work toward offering any nipple-fed (or cup-fed) breastmilk or formula as a structured, sit-down snack. At mealtime, offer breastmilk or formula in a cup. Wait to introduce whole milk until the child eats two or three ounces of family food at a meal. The food dilutes the pasteurized milk and keeps it from forming a tough and indigestible curd in the child’s stomach.

What is the basis for the recommendations?

Let us begin by digressing: The World Health Organization (WHO) and the American Academy of Pediatrics (AAP) are prominent in establishing breastfeeding policy.

Now to fill in the developmental blanks. From the perspective of growing up with eating, rather than going by the hard-and-fast “start solids at six months” rule, consider this: “Go by what you baby can do, not how old s/he is.” Some babies are truly ready for solid food by 4 or 5 months: They are sitting up, opening up for the spoon, and swallowing. Others aren’t ready until months later; Developmentally delayed children often aren’t ready until sometime in the second year.

During early infancy (roughly the first six months), exclusive breastfeeding or formula feeding on demand fits the children’s developmental needs and lets them accomplish homeostasis (becoming calm and organized) and attachment (falling in love with their parents). After that, they continue to master homeostasis and attachment and start to work on separation-individuation (discovering they are separate from others around them). To manage breastfeeding (or formula feeding by bottle) after introducing solid foods, the same principle applies:

From the perspective of growing up with eating, rather than going by age-related guidelines, consider this: “Go by what you baby can do, not how old s/he is.”

Observe what your child does. He will develop the ability to control the position of food in his mouth and mash it with his jaw before swallowing, close his lips around the rim of a cup, and pick up food and put it in his mouth. You support his learning by offering increasingly thick and lumpy food and finally by letting him join in with family meals and finger-feed himself soft, easy-to-chew food. Nipple feeding varies accordingly: The child who loves semi-solid from the spoon will fill up and not be too interested.  The child who doesn’t want to be bothered with solids will continue to depend primarily on breast- or formula-feeding. The one who is somewhere in between takes some food by nipple, some solids.

Making the transition to family meals

At some point children who show all three patterns (and others too numerous to mention) develop the interest and hand/mouth skills to eat soft family food with their fingers. Making that transition is often abrupt and enthusiastic. Early separation individuation takes the form of their caring deeply about doing it themselves: They bat away the spoon and try to grab it and prefer food they can eat by themselves.

If all has gone well during this progression, routine has evolved. To be interested in mealtime food, your child has to arrive hungry but not starved. To help him with that, at first you are likely to stave off nipple feeding a little and adjust mealtime a little. You offer snacks every two or three hours partly on demand and partly on a schedule that you determine. At the almost-toddler stage, you continue to support the transition from demand feeding to structure by offering your child sit-down snacks roughly every two or three hours between meals. Once you have your routine, you are set to follow the path that is right for you and your child. You can continue the process of weaning by introducing sit-down snacks with finger food and beverages from the cup. Alternatively, you can make those sit-down snacks breastfeeding or formula from the bottle. Extended breastfeeding is different for each family, but a common breastfeeding routine is early morning, before nap, and before bed.

The moral of the story? There is no right or wrong way to do this. Pay attention to your child, and feed in the way that is right for him. 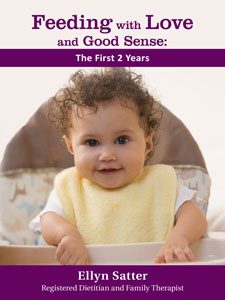 Feeding with Love and Good Sense: The First Two Years 2020 Gives  a brief and clear road map in words and pictures for navigating your child's early months. Sections about child development and temperament and step-by-step guidance on how and what to feed help you understand your child and guide feeding based on information coming from them. Newly introduced sections give guidance to parents on managing family meals: family-friendly meals, being considerate without catering with food selection, and using "forbidden" food.

To see what good feeding looks like as well as to read about it, see Ellyn Satter’s Feeding with Love and Good Sense DVD II.

Feeding in the first two years