Both the Satter Eating Competence Model (edSatter) and Intuitive Eating (IE) are models supporting internally regulated eating. Both are based on permission, which is essential for addressing negative and conflicted eating attitudes and behaviors: Permission to eat as much as you want and what you want. They differ, however, with respect to structure: Structured meals and snacks are an essential component of ecSatter, but not of IE. As a consequence, ecSatter is a better fit for fdSatter and sDOR, which depend on structure for feeding children. Mindful eating (ME) and non-dieting may or may not give permission, depending on the food politics of the practitioner. ecSatter defines structure as integral and essential. IE encourages eating on demand, and ME and non-dieting have no guidelines.

Not all approaches are the same

A reader’s question: “In the process of studying non-dieting and health at every size. We started with Eating Competence, and my students and colleagues asked about Intuitive Eating, mindful eating and non-dieting. What do you think?”

The fundamental principle of non-dieting and health at every size is internally regulated eating. While both Satter Eating Competence Model (ecSatter) and Intuitive Eating (IE) support internally regulated eating, it is unclear about “mindful eating” (ME.) ME is undefined and may use self-awareness as a method to promote either size acceptance or weight loss. The term “mindful eating” can be used as a descriptor denoting the tuned-in, self-aware eating that is a part of both ecSatter and IE. The reader’s question, however, appears to describe ME and  non-dieting as a stand-alone ideas, and that is how I will use the terms.

There is a major difference between a model and an idea. A model is a cohesive set of concretely described, evidence-based theoretical principles that can be objectively tested. An idea has none of those characteristics. ecSatter is a model. It is cohesive, based on theory and evidence, is concretely described1 and therefore reproducible by others, and examined by a validated test.2 Tribole and Resch’s Intuitive Eating3 is also a model: it is well-defined and reproducible, evidence based, and has a validated test.4 ME is a vaguely and variously defined idea that gets picked up by people and programs, seemingly to describe attentive, internally regulated eating. It doesn’t have a validated test. The principles and processes of non-dieting are generally vague and therefore not reproducible, are characterized by what it isn’t rather than what it is, and it doesn’t have a validated test. The term non-dieting is often misused by weight loss programs and food-control schemes that use behavioral or other methods to restrict calorie intake.

Both ecSatter and IE are based on permission, which is essential for addressing negative and conflicted eating attitudes and behaviors: Permission to eat as much as you want and what you want. ME and non-dieting may or may not give permission, depending on the food politics of the practitioner. With respect to discipline, ecSatter alone defines structure as integral and essential to the model.5 Instead of structure, IE essentially encourages eating on demand, eating preferred food immediately in response to emerging hunger and appetite.3 IE seemingly frames structure as imposing external rules for inner experience and therefore being tantamount to restriction. However, IE and ME are not discipline-free. Both emphasize the discipline of being tuned in to self, food, and eating. It is unclear whether non-dieting practitioners emphasize this discipline.

To ecSatter, structure is critical and not restrictive

ecSatter encourages weighing “what you will” in response to biopyschosocial processes including self-aware and deliberate eating for emotional reasons, trusting the body’s homeostatic mechanisms to balance any additional food intake and maintain consistent weight.1 IE recommends again all “eating for physical rather than emotional reasons”3 and raises the possibility of weight loss if and when emotional eating can be controlled. The IE assumption may be that the body doesn’t “remember” calorie intake from emotional eating or calorie deficit from stopping emotional eating and will gain or lose weight accordingly. ME varies by practitioner and comes down on all sides of the consideration, with some practitioners promising weight loss and others promoting size acceptance. Non-dieting practitioners may or may not support body weight that reflects biopsychosocial processes.

Addressing nutrition without taking away permission to eat is a dilemma with any method that aims to address conflict and anxiety relative to eating. Many practitioners resolve the dilemma by not addressing nutrition and food selection. Nutritional excellence is and always has been an integral component of ecSatter. As described in Satter’s Hierarchy of Food Needs,6 dietary quality is an experientially evolving process that sequentially builds on food security and structure: successfully providing oneself with enough to eat of rewarding food.

IE Principle 10, “Honor Your Health,” addresses “gentle nutrition.”3 It encourages eating “what you really want” and savoring food. Nutritional excellence appears to be a separate process: “In matters of taste, consider nutrition; in matters of nutrition, consider taste.”

ME and non-dieting practitioners address nutrition in a variety of ways, often undefined.

ecSatter makes a clear distinction between education and treatment and treatment of established distortions in eating attitudes and behavior. For IE, ME, and non-dieting, that distinction is unclear. With respect to ecSatter, people with  uncomplicated eating issues can help themselves. The “How to Eat” section of Secrets of Feeding a Healthy Family explains Eating Competence and tells how to achieve it. Feeding Yourself with Love and Good Sense takes a coaching approach, stepping the reader through the process of being Eating Competent. People with complicated and established issues can be assessed and treated using the ecSatter-based “How to Eat” method.7 “How to Eat” uses evidence-based cognitive-behavioral methods to support recovery from trauma around eating and regain positive eating attitudes and internal regulation capabilities. Methods include in-session desensitization training, reframing, self-awareness and self-acceptance training, and discovery in the course of take-home assignments.

For eating problems in general, IE encourages unconditional permission to eat3 – what you want, when you want, as much as you want. The task is to be in constant touch with hunger and appetite, eating immediately when hunger reaches a critical, subjectively defined level, and eating the food that is appealing at that moment. A related idea is flooding: allowing unlimited amounts of “forbidden” foods until the foods’ fear potential is neutralized and moderate and stable eating evolves. Clinically, IE depends on in-session teaching, discussion, and encouragement to replace negative eating attitudes and behaviors with positive ones.

Treatment with ME and non-dieting varies depending on the practitioner.

Respecting the model is critical for research

We need responsible and rigorous research if we are to displace negative and controlling eating management with kinder, gentler ways. Research depends on well-defined, evidence-based, reproducible models that can be tested using validated tests. Moreover, the processes of a given model must be absolutely respected, with no improvising or substituting. I put my name on ecSatter to protect it from appropriation and amendment. As a model, ecSatter is only effective when all the elements are in place. The same holds true for IE. Unless ME and non-dieting are concretely defined and therefore reproducible, they can’t be subjected to repeated research testing. In her studies on non-dieting, Linda Bacon8 called her eating management approach “intuitive eating,” although she neither credited Tribole and Resch nor used their model. Bacon appeared to use a combination of vaguely defined stop-dieting/size-acceptance education and persuasion and a compendium of nutritional strategies. As a result, she researched her own definition of non-dieting in combination with her own ideas for food management.

This is not to say that we have to reject ideas. Certainly we have all been inspired by the work of others, and we all benefit from remembering whose conceptual shoulders we stand on. While none of them created models that we can research, I was still helped to challenge my conventional thinking by Hirschmann and Munter’s Overcoming Overeating, who in turn were influenced by Kano’s Making Peace with Food. Or maybe it was the other way around, and somewhere in there was Roth’s Feeding the Hungry Heart. You undoubtedly were influenced by others, and that is good. However, for research, education, and clinical work, you are wise to use a model. Your work can only be understood and replicated when you clearly define what you do.

This kind, clear, and matter-of-fact booklet shows you how to eat. Discover the joy of eating and escape from struggling with eating and weight! 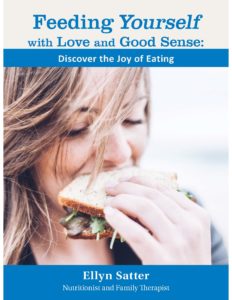