To address picky eating, start with your attitude. Continue to eat the foods you enjoy, pay attention while you eat, and say to yourself, ”It’s all right to eat this. I just have to pay attention and enjoy it.” Learn to defend yourself against food pressure and criticism, and tune up your mealtime social behavior. Let yourself learn and grow, and after a while – a long while – you may begin to experiment with unfamiliar food.

In Session 3 of the Satter Eating Competence Model course, ”Working with poor food acceptance and poor food regulation,” Patty Morse, Ellyn Satter Institute Emeritus Faculty Member, does an excellent role-play of the adult picky eater. Patty created her role based on the many adults with whom she has worked. Patty (in her role) is ashamed of her eating. She confesses, ”There are only a few foods that I eat.” She says her picky eating isolates her socially. Because people make comments about her eating, she feels she can’t go to church potlucks and she can’t eat in the break room at work. Patty has been a picky eater from the time she was little. Her parents both catered to her and were critical of her pickiness, and now Patty caters to and criticizes herself in the same way. To help Patty, I did not focus on getting her to eat a greater variety of food. Instead, I addressed helping her become a competent eater.

Her parents both catered to her and were critical of her pickiness, and now she caters to and criticizes herself in the same way.

Patty’s self-criticism puts pressure on her to eat and makes her so anxious she can’t learn. My being accepting of Patty’s food foibles addresses her attitude. Since I, the food authority, don’t think her eating is so bad, perhaps it isn’t so bad after all! I also help Patty forgive herself for her picky eating by addressing her food history. It wasn’t so much that she was inherently a bad kid. It was that her parents inadvertently taught her to be a picky eater by making two mistakes: they limited the menu to food she readily accepted, then they put pressure on her to eat it, which made her so anxious she couldn’t learn. Because Patty feels so bad about her eating, she ”eats without eating” even her familiar foods. She distracts herself from eating by reading a book or watching TV. Using her familiar food, I encourage Patty to pay attention while she eats. In fact, she is to say to herself, ”It’s all right to eat this. I just have to pay attention and enjoy it.”  That starts her off with neutralizing her feelings and attitudes about eating.

Once she stops criticizing her eating, Patty can become comfortable with eating in public. She can learn what is and isn’t okay with her own eating behavior, then she can expect others to mind their own business. It is okay to pick and choose from what is on the table, to decline to be served, to eat only one or two food items, to leave unwanted food on her plate, and to take more of one food when she haven’t finished another. It is not okay to draw attention to her food refusal or to ask for food that is not on the menu.

Sneak up on new food and learn to like it

In neutralizing her conflict and anxiety about eating, stopping her own (and others) criticism, and breaking her social isolation, Patty has gained most of the benefits from the intervention. Learning to like new foods is the frosting on the cake! Now that she has reduced the pressure on her food acceptance, she can give herself the repeated neutral exposure with food that she didn’t get from her parents. Given how long she has been living with such a limited number of foods, she may learn to like only two or three new foods a year. But it will add up, and over time, her food world will expand. 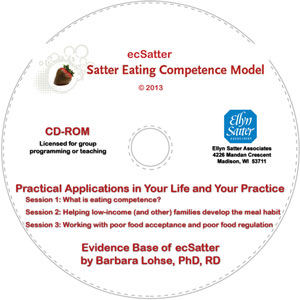 Ellyn Satter’s Secrets of Feeding a Healthy Family says the secret of raising a healthy eater is to love good food, enjoy eating, and share that love and enjoyment with your child. When the joy goes out of eating, nutrition suffers.